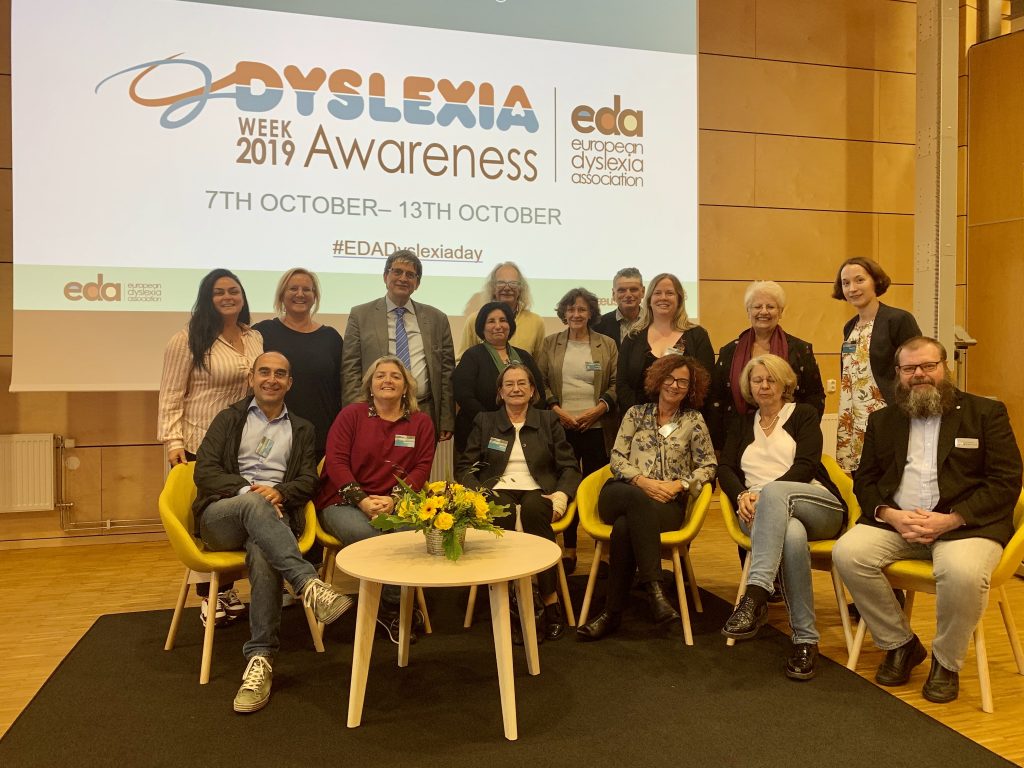 EDA Board Directors (BD) present at this 2019 AGM

EDA President (2015-2019) Mr Michael Kalmar presented the last annual report of his presidency (Appendix B). He noted that his presidency term concluded at the end of the 2019 AGM and that he did not intend to run for EDA Board elections again and his association (Österreichischer Bundesverband Legastheniehas) has been notified.

EDA Board Director Ms Christine Scziegel took the floor to thank Michael for all the great work he has done over the years and presented him with a gift (silver frame) from the EDA Board.  Mr Kalmar was also awarded a certificate making him an Honorary Member of the EDA in recognition of his huge contribution over many years to the work of the EDA, both as a Board Member and as Chairman.

(Every committee was allotted ten minutes for the respective reports)

EDA treasurer Dr Ruth Falzon presented a report on EDA’s Finances, and accounts for the 2018 calendar year. 2018 saw a loss of €1,848 in real terms, which increased to a loss for accountancy purposes of €8,355.97 due to writing off unpaid memberships prior to 2018 which had been accrued for in previous accounts and which now must be written off.

Falzon noted that ideas on how to generate more funds would be welcomed from members.

Falzon presented the present membership profile – 31 members are fully paid up to date this year (2019), another 13 are outstanding for this year (2018). Three are asking for a reduced rate.

Ms Pernilla Soderberg-Juhlander suggested looking for sponsors for EDA activities. EDA Board will look at developing a protocol for this.

Dr Ruth Falzon remarked that EDA also needs to recruit as many members as possible to ensure we are fully representative, and to maintain a strong network across Europe.

Ms Pernilla Soderberg-Juhlander asked the EDA Board to consider further develop development of the website and social media to enhance communications and exposure.

Mr Vincent Lochmann referred to income that should be generated from (a) the Erasmus+ project Dyslexia@Work also noted, and (b) the EDA Consultancy work on the Viotti RDDA project.

Ms Christine Scziegel thanked Dr Ruth Falzon for her work on the accounts.

Later on in the meeting (Point 10 below), Dr Ruth Falzon proposed the 2018 accounts and Ms Mercedes Mayoral seconded.  The Assembly unanimously present accepted the accounts report.  There were no abstentions.

Ms Pernilla Soderberg-Juhlander thanked the Assembly for attending the 2019 autumn seminars. She hoped that more member-associations would take part in the Associations’ presentations session at the 2020 EDA Seminars and that reports during next year’s seminars would increase, as this year’s reports were very well received.

Mr Vincent Lochmann reported that there is now a new EU Parliament, so now is a good time to propose new issues for discussion.  Mr Lochmann suggested the topic of mobility of rights and access to accommodations. He reported that contact is to be made with EU network organisations related to access arrangements to identify common issues and urged the Assembly present to communicate with their MEPs.

Ms Sue Flohr noted the need to map current legislation and practice across Europe. She acknowledged that this would be a big task.

The Assembly suggested that, if elected, Ms Mercedes Mayoral should be chair of this sub-committee.

Dr Giannis Karagiannakis reminded that the AAC was established around two years ago. Its tasks included reviewing abstracts or specific questions for research.  The AAC has also reviewed texts on EDA website.

He explained that the AAC needs to identify clear plan and realistic priorities for the AAC. AAC members are very busy academics, have limited time, and EDA is not always able to pay for their costs or time. The need to consider more flexible approaches to engagement, for example events- or actions-specific academic/scientific committee. The EDA Board will discuss this further with the AAC.